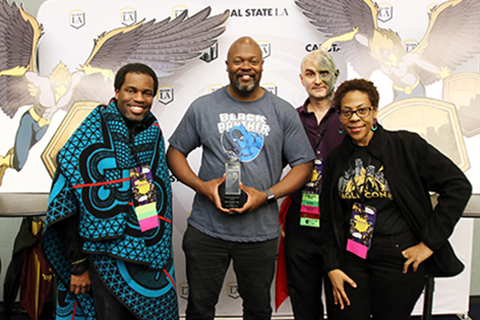 Coker is the showrunner, executive producer and writer for the Netflix project that was the first TV show to star an African American superhero. Wearing a Black Panther comic book T-shirt, he accepted the 2018 Eagle-Con Prism Award on Saturday for furthering representation through artistic media.

“The success of [Black Panther] plays backward and forward because it helps across the entire realm of entertainment in terms of what people of color can accomplish,” Coker said onstage after receiving the award. “Now they can’t say that Black-themed projects don’t travel. They can’t say that there isn’t a diverse audience for fantasy and science fiction.”

The award presentation capped a full day of panels, speakers and exhibitors on March 10 at Cal State LA during the final day of Eagle-Con, a three-day convention that explores issues of race, ethnicity, gender, sexuality, identity and representation in science fiction and fantasy across media. The event’s founding sponsor is the Art Directors Guild.

Attendees of the convention, which was themed “Aliens, Monsters and Others,” explored an expansive exhibit from the Art Directors Guild, showcasing storyboards, concept art and other pre-production work on well-known science fiction and fantasy TV shows and films.

“This year’s Eagle-Con was even more successful than we could have imagined,” said Patrick B. Sharp, one of the founders and faculty director of the convention and interim associate dean of the Cal State LA College of Arts and Letters. “The Art Directors Guild has been with us from the beginning, and with its generous support Eagle-Con will become a staple in the Los Angeles science fiction and fantasy community.”

For three days, Cal State LA’s Golden Eagle Ballrooms and University-Student Union were transformed into a haven for those who enjoy stories about other worlds and other beings. The phenomenal success of Black Panther set a celebratory tone throughout the gathering at a time when the importance of racial, ethnic and gender diversity is at the forefront of national conversations about science fiction. Hopkinson, who is also a creative writing professor at UC Riverside, has won numerous awards for her short stories and six novels, including her first, Brown Girl in the Ring. This novel was also the inspiration for a feature film, Brown Girl Begins.

“This is an excellent time to be given this honor,” Hopkinson said to a full room in the University-Student Union on March 8. “When I first began reading Octavia’s books, when I first began publishing my own, there was no hope of ever seeing our work enter the mainstream.”

March 8-9 featured student-centered panels exploring issues such as the portrayal of women and feminism in superhero films and TV shows and the evolution of Afrofuturism, an aesthetic that infuses elements of African cultures into science fiction and fantasy.

Cal State LA professor Libby Lewis led an engaging discussion on the legacy of Octavia E. Butler with Natalie Russell, assistant curator of literary collections at the Huntington Library. Russell helped organize the more than 8,000 pages of letters, manuscripts and photographs that comprise Butler’s special collection at the Huntington.

Russell recited a quote from Butler, the first African American woman to gain widespread recognition in science fiction: “Why do I write? Because I can’t expect anyone else to tell my stories.”

“It was great to see so many from Cal State LA and the wider community come out for Eagle-Con,” said Cal State LA Executive Vice President Jose A. Gomez. “The panels provided valuable insight into the world of science fiction and fantasy. Our students and others were able to learn about career opportunities from top professionals in the entertainment industry.”

The day’s panels provided an inside look into the entertainment industry, featuring concept artists, writers, producers and costume and production designers, including the team behind the visual world of Guardians of the Galaxy: Vol. 2 and legendary costume designer Deborah Nadoolman Landis, UCLA professor and director for the David C. Copley Center for the Study of Costume Design.

Eric Wallace, co-executive producer and writer for The CW’s The Flash, shared insights into the writing and producing process of TV shows and comic books during a conversation with Los Angeles-based entertainment journalist Hannibal Tabu.

A panel on writing for science fiction and superhero TV shows touched on the importance of diversity in writer’s rooms.

“Diversity is a buzzword you hear a lot these days, but it’s so important so that you aren’t getting just one viewpoint conveyed,” said Christos Gage, who writes for Marvel’s Daredevil on Netflix and has worked on The CW’s Arrow.

Eagle-Con was co-founded at Cal State LA in 2014 by Rhonda Mitchell, who was then the program coordinator for the university’s Cross Cultural Centers.

Mitchell returned to campus on Saturday and was recognized for her “creativity, passion and inspiration.” She received the award from Cal State LA New Student and Parent Programs assistant director Christopher Johnson, who along with Sharp co-founded the convention with Mitchell.

After accepting the Prism Award, Coker applauded Eagle-Con and expressed his deep appreciation for the honor.