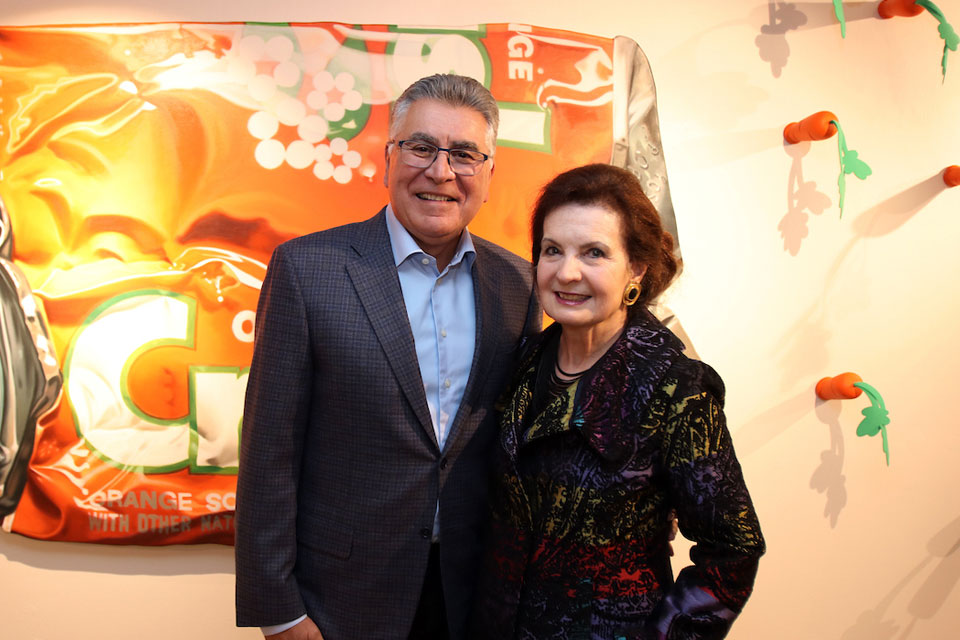 A large glass eyeball. A crushed can of Orange Crush soda. A man making a photocopy of his head.

Works by celebrated pop art icon Andy Warhol and artists including Yayoi Kusama, Red Grooms and Claes Oldenburg are part of the exhibit: “Pop Culture: Selections from the Frederick R. Weisman Art Foundation.” It will be on display at the university through August 2.

“We have people painting things like soup cans—just taking everyday things and making them important,” curator Billie Milam Weisman said at an opening reception for the exhibit. “It’s documenting a time in history.”

Weisman, a world-renowned art conservator and collector, is the director of the Frederick R. Weisman Art Foundation. The exhibit, which showcases pop art pieces from the 1960s to the present, was previously on display at Pepperdine University, the Santa Monica College Performing Arts Center and the Reading Public Museum in Pennsylvania.

“One need not travel to major Metropolitan museums to see a finer collection of one of the most influential art movements in history,” The Sentinel newspaper in Pennsylvania wrote about the traveling exhibit. “From the iconic and well known, to lesser-known, emerging artists, ‘Pop Culture: Selections from the Frederick R. Weisman Art Foundation’ demonstrates the Pop Art movement’s power and its impact upon society.”

Prints, paintings, photographs and sculptures of the pop art movement fill the space of the gallery, which is housed in the College of Arts and Letters.

The showing is part of the university’s comprehensive fundraising campaign, We Are LA: The Campaign for Cal State LA. So far, the university has raised $60 million of its $75 million goal.

The exhibit was made possible by campaign co-chair, alumnus Richard Cordova and his wife Janice, who was a longtime close friend of Weisman.

“It is a privilege to host such an exceptional exhibit of art at our university,” said Cal State LA Vice President for University Advancement Janet S. Dial. “We are very grateful to the Cordova family and Billie Milam Weisman.” 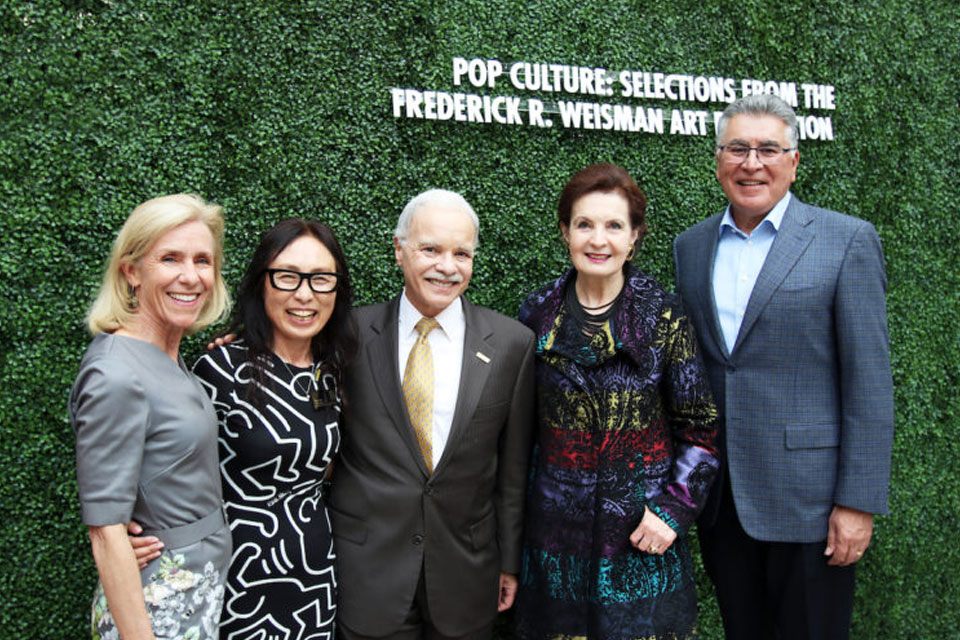 Janice Cordova died just days before the start of the exhibit. President William A. Covino and the university community paid tribute to her life during the opening reception on June 1.

“Tonight we celebrate the power of art, the beauty of friendship, and the enduring legacy of unselfish acts,” Covino said to the crowd gathered in the gallery space.

The pop-art movement emerged in the mid-1950s, with artists beginning to use images from consumer culture and everyday objects in their works to challenge traditional art-making and provide ironic commentary on society’s consumerism.

Warhol was one of the most significant pop artists and was known for creating works that included brands like Campbell’s Soup. Two of his pieces, “Portrait of Frederick Weisman” and “Ladies and Gentleman,” are on display at the gallery.

Art students in the College of Arts and Letters, alongside gallery director Mika Cho, worked to install the pieces in the gallery space.

Genie Davis, writing for the online art magazine Art and Cake, called the exhibit a “museum-quality show that dazzles with illustrious art names and provocative layout.”

“The result is a strong show in which the artworks speak to each other, both through spectacular placement and the strength of the works themselves,” Davis wrote.

The collection on display includes Tony Tasset’s “Big Eye,” a large eyeball perched in one of the gallery’s rooms. “Eye,” a similar piece by Tasset—but three stories high—made headlines in 2013 as a public installation in Dallas.

Guests walking into the gallery are greeted by a smiling, disembodied mouth, Tom Wesselmann’s “Mouth #4.”

“As you enter, you see the Wesselmann smile,” Weisman said. “I hope that’s how you feel when you leave, with a smile on your face.”

The Ronald H. Silverman Fine Arts Gallery is open Monday through Friday from 12 to 5 p.m.