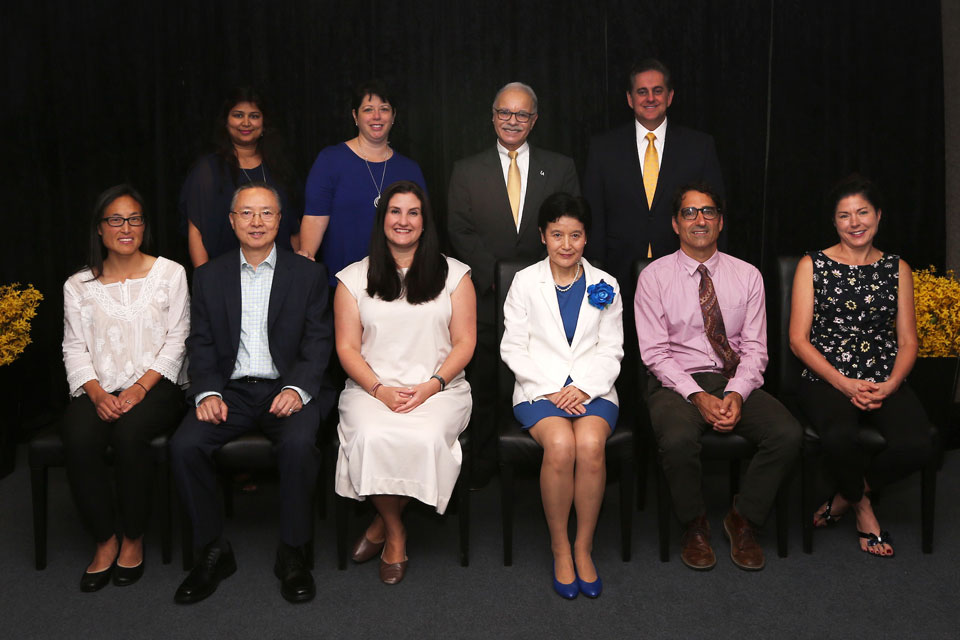 Six Cal State LA faculty members were recognized for excellence in teaching and outstanding achievements during the 2019 Fall Convocation at the Luckman Fine Arts Complex.

The four Outstanding Professor recipients and an Outstanding Lecturer recipient were honored for significant achievement in scholarly inquiry or creativity, as well as professional activities and community service.

A President’s Distinguished Professor Award was presented to a previous outstanding professor recipient. This award acknowledges the faculty member’s superlative teaching and exceptional commitment to students, as well as professional accomplishments and services.

The six award recipients were introduced by Professor Meredith Greenburg, chair of the Outstanding Professor Awards Committee. Each recipient is listed below and featured on YouTube.

Sachiko Matsunaga is a professor of Japanese in the College of Arts and Letters’ Department of Modern Languages and Literatures. She also chairs the department, which offers programs in Chinese, French, Japanese, Korean, and Spanish.

Matsunaga’s research interests include reading processes and acquisition of reading skills in Japanese as a foreign language. She has authored more than 40 publications and delivered more than 50 presentations in these areas, as well as on the topics of online learning, Asian language curriculum development, and Japanese language education in the U.S.

During her tenure at Cal State LA, Matsunaga has served on the Academic Senate, Strategic Planning Coordination Committee, and Faculty Retreat Planning Committee on Diversity and Inclusion. She was on advisory boards for the Asian and Asian American Institute and the Department of Asian and Asian American Studies. Additionally, she held the positions of Japanese section coordinator, director of the Japanese Studies Center, and principal investigator/director of the Strategic Language Initiative Korean Program.

Matsunaga, who resides in the city of Sierra Madre, received her Ph.D. in Japanese linguistics and pedagogy from the University of Hawaii at Manoa.

Mark Balaguer is a professor of philosophy in the College of Arts and Letters. He is also an influential philosopher with an international reputation.

Balaguer has authored three books—Platonism and Anti-Platonism in Mathematics, Free Will as an Open Scientific Problem and Free Will, the last of which has been translated into multiple languages. He also authored 45 articles that were published in journals and anthologies.

He is currently working on his fourth book—Metaphysics, Sophistry, and Illusion—in which he develops a far-reaching critique of metaphysics.

Balaguer has delivered lectures at more than 50 conferences and colloquia, and he has given a series of lectures in Scotland, Hungary, and Croatia, as well as at UCLA. He teaches courses on logic, critical thinking and a broad range of philosophical topics.

A Cal State LA faculty member since 1992, he has served as chair of the Department of Philosophy. He has also served for many years as one of the main advisers and mentors to M.A. students. Many of his students have gone on to top-notch Ph.D. programs and to tenure-track professor positions at other universities.

A Los Angeles resident, Balaguer received his Ph.D. in philosophy from City University of New York.

Heidi Riggio is a professor of psychology in the College of Natural and Social Sciences. She is currently president-elect of the Western Psychological Association.

Riggio’s primary research interests are in political attitudes, religiosity, sexuality, and attitudes in personal relationships. She has authored 27 journal articles, including 14 with student co-authors, four instructor’s manuals for two textbooks, and two student workbooks on critical thinking. Her first textbook, Sex & Gender: A Biopsychological Approach, will be published in 2020 by Routledge.

She has served as a primary adviser in psychology since 2006 and has developed curricula surrounding academic and career advising. She received the Outstanding Advisor Award from the college in 2014 and the Distinguished Service Award from the Western Psychological Association in 2015.

Riggio serves on the Cal State LA Academic Senate and is also a senator on the CSU Academic Senate. She has been a member of numerous committees at Cal State LA, including the Institutional Review Board and University Faculty Policy Committee.

A resident of Claremont, she received her Ph.D. in social psychology from Claremont Graduate University.

Deborah Won is a professor of electrical and computer engineering in the College of Engineering, Computer Science, and Technology (ECST). She co-developed the minor degree and upper division specialization in biomedical engineering.

Won’s research focuses on developing and understanding medical device technology for treating disorders of the nervous system. She has researched retraining spinal circuits with robot-assisted neuromuscular electrical stimulation for gait rehabilitation, cognitive side effects of deep brain stimulation for Parkinson’s disease, and a mobile exergaming system for promoting fitness in individuals in wheelchairs.

Won has been the principal investigator or co-principal investigator on grants totaling approximately $1.9 million. As part of a National Science Foundation (NSF) project, Won researched the impact of design-focused service learning experience on the academic success and preparedness of engineering majors during their freshman-to-sophomore transition.

She also served as the inaugural director of the First-Year Experience at the College of ECST, a first-year cohort program that provides students with skills and support for ongoing success in their majors. She has mentored dozens of students who have earned honors and awards, such as the NSF Graduate Research Fellowship, travel grants, and research microgrants or scholarships. She also authored dozens of peer-reviewed journal and conference papers.

A South Pasadena resident, Won received her Ph.D. in biomedical engineering at Duke University, and worked in an engineering research center at USC before joining the Cal State LA faculty in 2009.

Howard Xu is a professor of microbiology in the College of Natural and Social Sciences’ Department of Biological Sciences.

Xu directs an applied microbiology and biotechnology lab at Cal State LA, where students conduct research on novel antibiotics and elucidation of mechanisms of pathogenesis of bacterial pathogens. He has mentored master’s, undergraduate and post-baccalaureate students, resulting in more than 40 peer-reviewed publications from his lab.

He is also the director of incubator development and programming for Cal State LA BioSpace, which is leading the university’s collaboration with private-sector firms and government agencies to promote inclusive entrepreneurship, innovation, workforce development, and commercialization of the regional bioscience industry in the heart of Los Angeles.

Xu has secured more than $2 million in grants for his research program studying mechanisms of antibiotic resistance and virulence, with a special emphasis on developing novel antibiotics. He has also been co-principal investigator on more than $11 million in grants that support research and biotechnology initiatives at Cal State LA.

For his outstanding contributions to biotechnology research and education, he was presented the Anthony Andreoli Faculty Service Award in 2011 and the Faculty Research Award in 2018, both from the CSU Program for Education and Research in Biotechnology.

A resident of Alhambra, Xu earned his Ph.D. in microbiology from the University of Minnesota and was awarded a postdoctoral fellowship by The Ohio State University

Jessica Bodoh-Creed is a lecturer in the Department of Anthropology in the College of Natural and Social Sciences.

Her research focuses on the “ER Effect,” which illustrates the ways in which audiences learn medical information from fictional television shows, celebrity physicians, and pharmaceutical advertisements. She has authored The Field Journal for Cultural Anthropology, and co-edited and contributed to the forthcoming The Everyday Life of Urban Inequality: Ethnographic Case Studies of Global Cities.

Bodoh-Creed conducts lectures for physicians as a part of their continuing medical education mandate. She is currently working on a new research project about women who are powerbrokers in Los Angeles.

Bodoh-Creed serves as project manager on the NSF Western Spokes Big Data Grant, sits on the university’s Fulbright committee, is the faculty sponsor for the Association of Student Anthropologists, and acts as a department lecturer representative for the California Faculty Association. She has also created the Department of Anthropology’s annual newsletter and worked on the department’s assessment committee.

In her nine years at Cal State LA, Bodoh-Creed has taught 21 different courses that include a graduate seminar across three departments in two colleges. Her students have participated in projects benefiting Los Angeles domestic violence shelters, as well as other community service agencies. She has sat on both undergraduate honors and graduate theses committees.

Bodoh-Creed earned her M.A. from Cal State LA and her Ph.D. from UC Riverside. She resides in the Los Feliz neighborhood of Los Angeles. 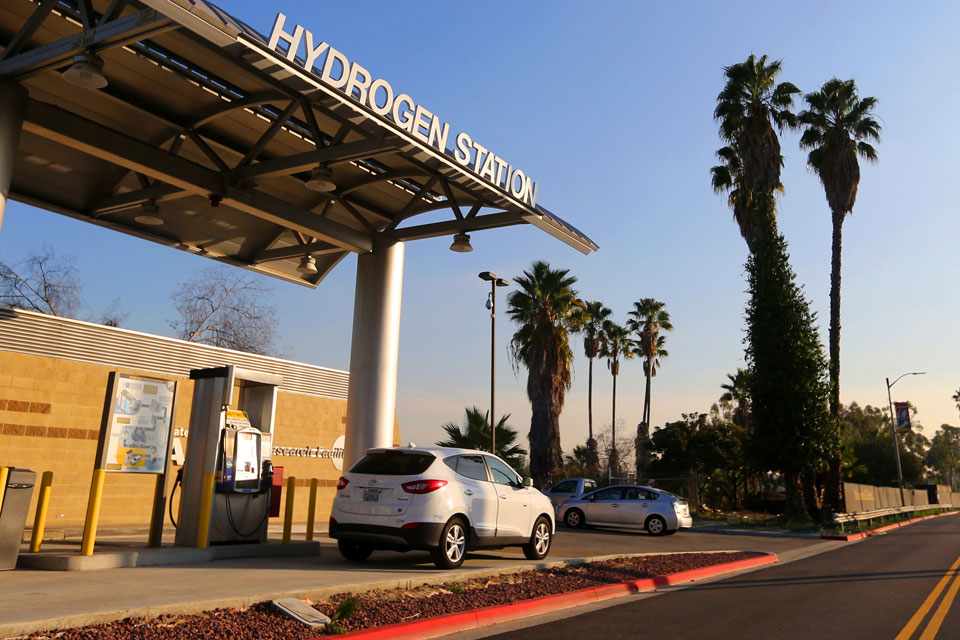 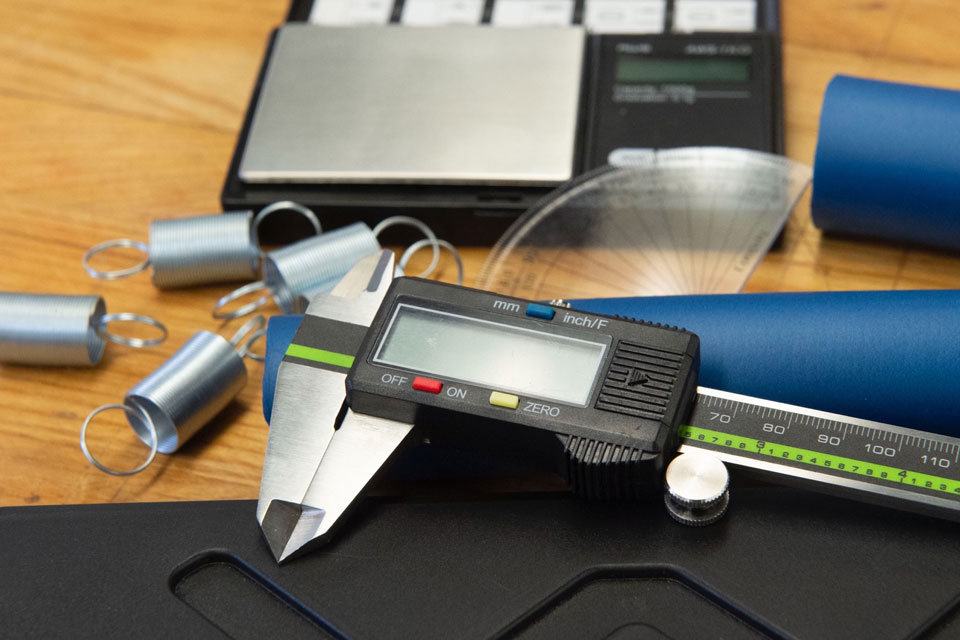 When Cal State LA shifted to virtual learning in spring 2020, faculty in the College of Engineering, Computer Science, and Technology quickly realized a need to incorporate a hands-on experience similar to what students would have engaged in on campus. Over the...