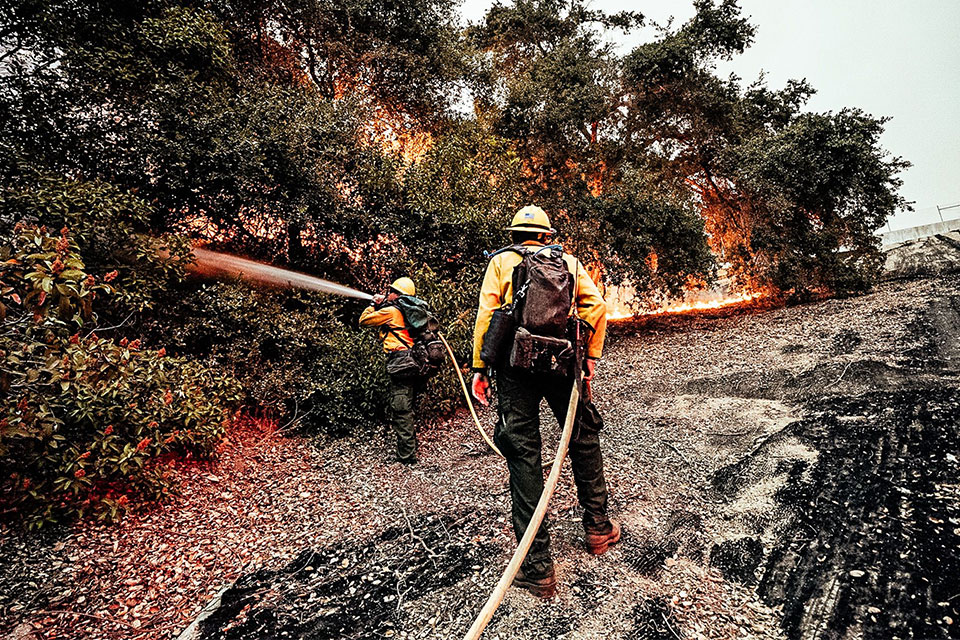 The students are firefighters pursuing bachelor’s degrees in the unique Fire Protection Administration and Technology program in the College of Engineering, Computer Science, and Technology.

From the Bobcat Fire in Los Angeles County to the massive Creek Fire in Fresno and Madera counties, Cal State LA students have braved searing heat, choking smoke and constant fatigue during what has become a devastating fire season in California and across the West.

“It’s definitely an intense experience out there on the front line,” says Hector Banda, 21, a senior fire protection administration and technology major assigned to a U.S. Forest Service crew fighting the Bobcat Fire in the mountains north of Cal State LA.

As he rested in a base camp, Banda spoke in a phone interview about attacking the wildfire with an army of firefighters from different agencies. Since breaking out in the Angeles National Forest on Sept. 6, the Bobcat Fire has scorched more than 114,000 acres. 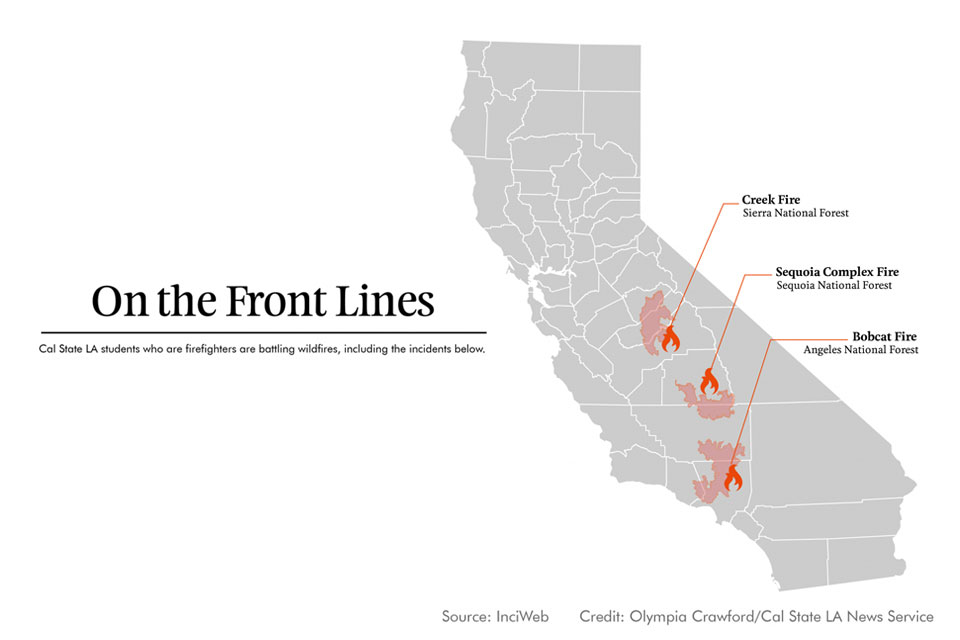 For days, Banda and other crews have traversed rugged terrain, blasting hotspots with water, watching for spot fires and cutting fire breaks to slow the advancing flames.

“We’re holding the fire line,” says Banda, who was raised in South Los Angeles and credits Cal State LA with helping him pursue his dream of a career in the fire service.

Like Banda, Anthony Galvez has been fighting fires with the U.S. Forest Service while completing his final year at Cal State LA. Raised in Pico Rivera, the 27-year-old Galvez is assigned to a fire crew in Cherry Lake in the Stanislaus National Forest.

In early September, Galvez and his crew were dispatched to the mammoth Creek Fire, the largest single wildfire in California history. The blaze has burned more than 307,000 acres in the Sierra National Forest.

When the crew members arrived, their immediate concern was protecting the small town of Big Creek in Fresno County. As flames devoured timber and brush in the hills above them, Galvez and his team stretched out hose lines, ready to spray protective curtains of water, and they began burning nearby brush that could fuel advancing flames and turn the town into a raging inferno.

In the end, the defensive measures enabled the firefighters to save dozens of homes nestled in the foothills of the western Sierra Nevada.

“I felt like I made a difference,” Galvez recalled several days later. “I was exhausted. But I felt like if I had to stay up another 78 hours, I’d definitely do it again to protect those houses and do my job.”

Cal State LA sophomore and Whittier resident Jocelyn Cardenas is among the legions of firefighters battling the Sequoia Complex Fire, which has burned more than 150,000 acres in the Sequoia National Forest.

Cardenas, 27, is assigned to a fire crew with the California Department of Forestry and Fire Protection. She and her crew were working with other firefighters in a fierce battle to contain the wildfire. 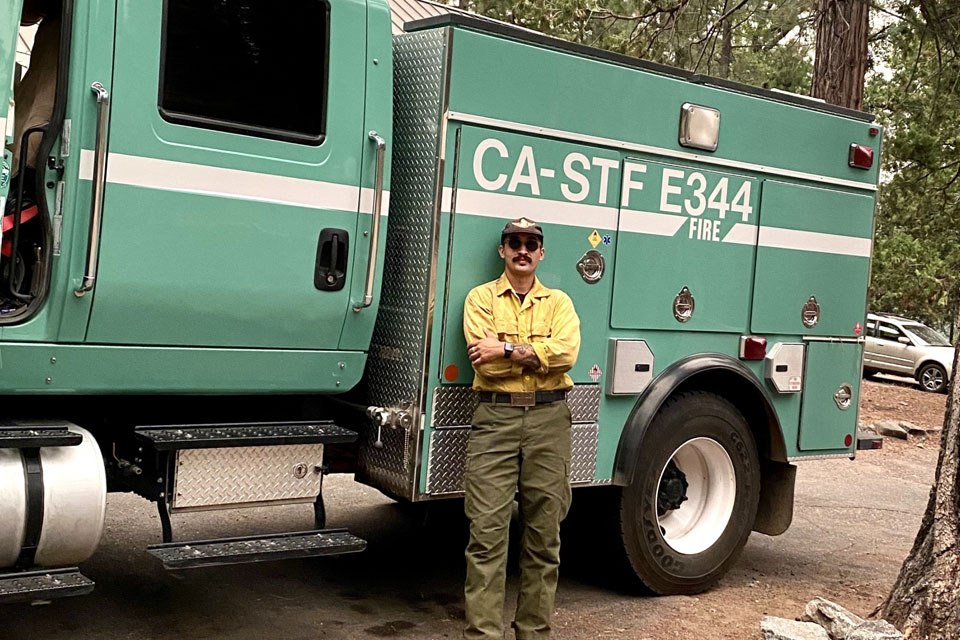 Photo: Cal State LA student Anthony Galvez is assigned to a U.S. Forest Service fire crew in the Stanislaus National Forest. (Photo courtesy of Anthony Galvez)
It’s a risky assignment, one in which erratic winds and crown fires—intense blazes at the tops of huge trees—can transform a forest canopy into a ceiling of flames.

“The job is dangerous. You really have to be paying attention and be cautious of what’s around you,” Cardenas said in a recent phone call between shifts on the fire line.

She pointed out that other hazards abound, including dead trees and boulders, which can roll down the sides of hills and crush unsuspecting firefighters. “It’s not just the fire you need to pay attention to,” Cardenas says.

Amid the intensity of a firefight, safety is a crew’s number-one priority. Conditions can change in an instant, so being aware of threats like weather changes or spot fires can be paramount to firefighting safely. Wildfire crews maintain constant communication with their operations team, and other nearby crews, while staying conscious of escape routes and safe points if the time comes to pull back.

“If you don’t feel like [a situation] is right, you’ve got to speak up.” says Galvez. “Everybody just wants to get the job done, and they want to get it right. Nobody wants to get hurt.”

For crews fighting wildfires, hours are long and demanding. Firefighters can be on the clock for 24-hour shifts, ready to respond to any incident. Some, like Banda and Galvez, have worked 14 days straight, battling both fire and fatigue on the front lines.

Despite exhaustion, the three Cal State LA students dedicate their limited free time to their studies in the Fire Protection Administration and Technology program.

The fully virtual curriculum allows students to acquire their degrees while working for fire agencies, said faculty member Michael Thomas, a former battalion chief with the Los Angeles Fire Department who has been teaching in the program since 2016.

Established in the late 1970s, the program offers a unique mix of classes in emergency management, administration and technical aspects of fire suppression and prevention. 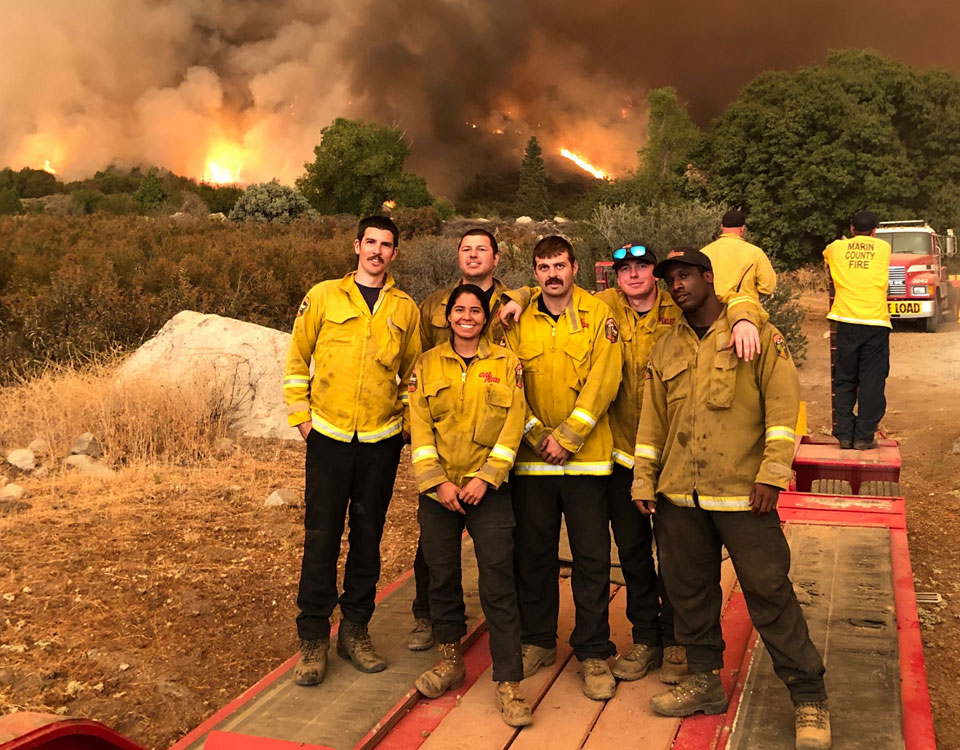 Students agree, saying the virtual curriculum has been invaluable during this chaotic fire season.

“If I have a lunch break I try to work on whatever I can,” says Cardenas. “When we’re driving I try to sit in the back of the buggy and try to work on assignments there.”

The courses prepare students for highly competitive entry-level firefighting positions as well as opportunities for promotion.

Galvez, who joined the Forest Service 18 months ago, says the curriculum has been instrumental in teaching him skills applicable to his daily work.

“Knowing how to do basically anything hands on, I learned it from Cal State LA from those courses,” he says.

Banda foresees the degree helping advance his professional goals, as he aims to become a member of an elite hotshot crew. These crews battle the hottest, most demanding parts of a wildfire. Eventually, Banda wants to be promoted to a captain in the Forest Service.

While the work can be dangerous and exhausting, the three Cal State LA students said they have enjoyed the challenge firefighting presents, as well as the opportunity it has provided to help carry out the university’s commitment to engagement and service for the public good. 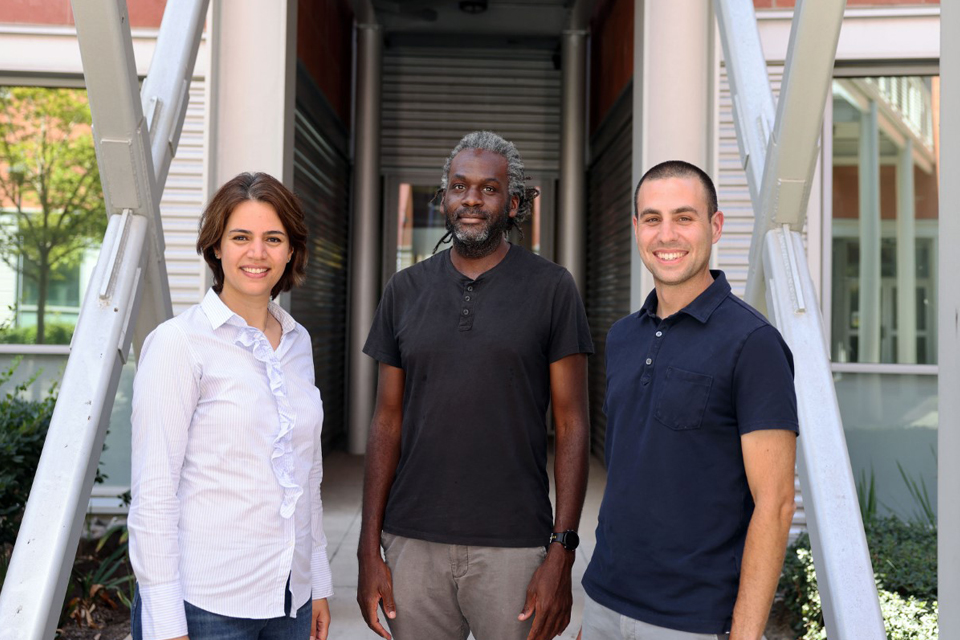 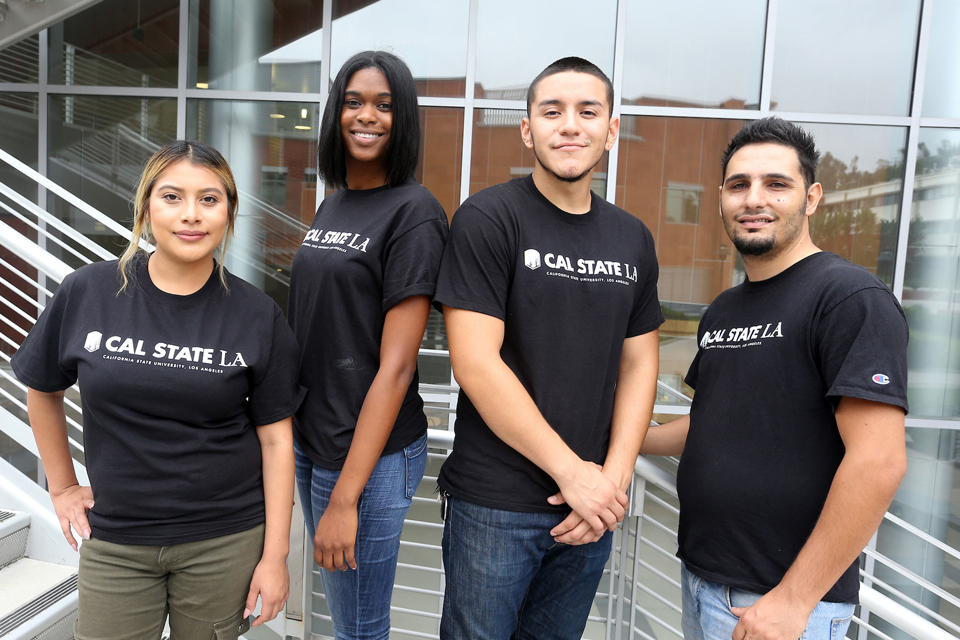 Cal State LA has received the 2022 Higher Education Excellence in Diversity (HEED) Award from INSIGHT Into Diversity magazine, the nation’s oldest and largest diversity-focused publication in higher education. As a recipient of the annual HEED Award—a national honor... 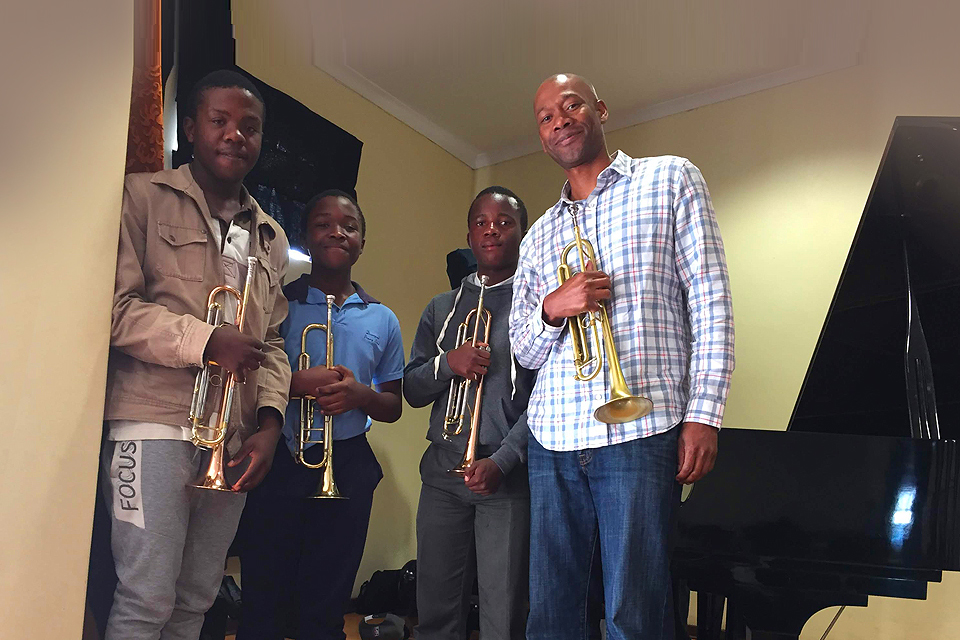 Cal State LA has been named a Fulbright HSI Leader by the U.S. Department of State’s Bureau of Educational and Cultural Affairs. The university is among 43 Hispanic-Serving Institutions (HSI) selected for the designation, which recognizes noteworthy engagement and... 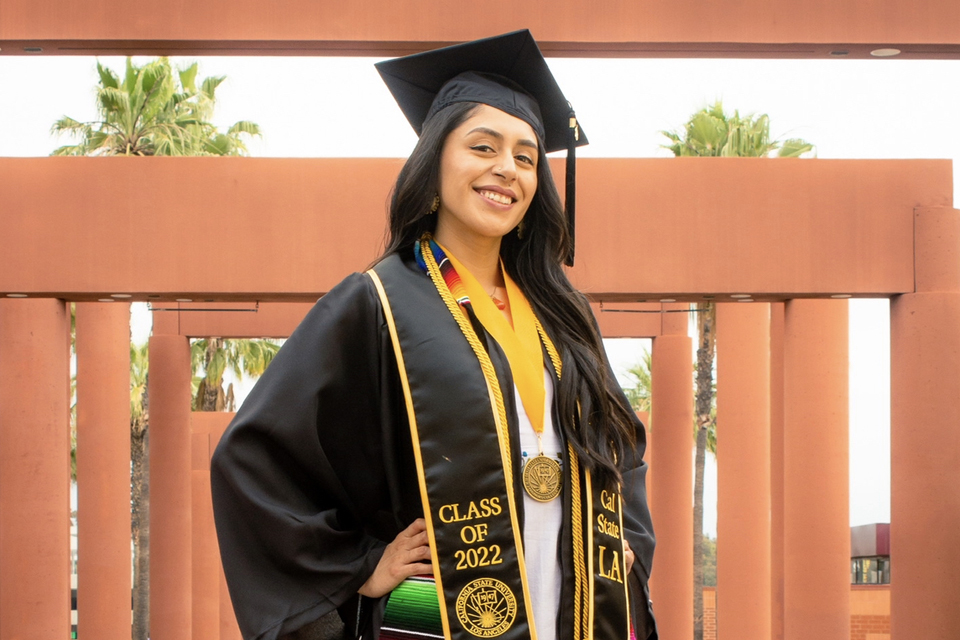 The Campaign for College Opportunity has named Cal State LA a 2022 Champion of Higher Education for Excellence in Transfer. The university will be recognized for supporting transfer students during the annual Champions of Higher Education Celebration on Nov. 1....

Cal State LA has received the 2022 Higher Education Excellence in Diversity (HEED) Award from INSIGHT Into Diversity magazine, the nation’s oldest and largest diversity-focused publication in higher education. As a recipient of the annual HEED Award—a national honor...

Cal State LA has been named a Fulbright HSI Leader by the U.S. Department of State’s Bureau of Educational and Cultural Affairs. The university is among 43 Hispanic-Serving Institutions (HSI) selected for the designation, which recognizes noteworthy engagement and...