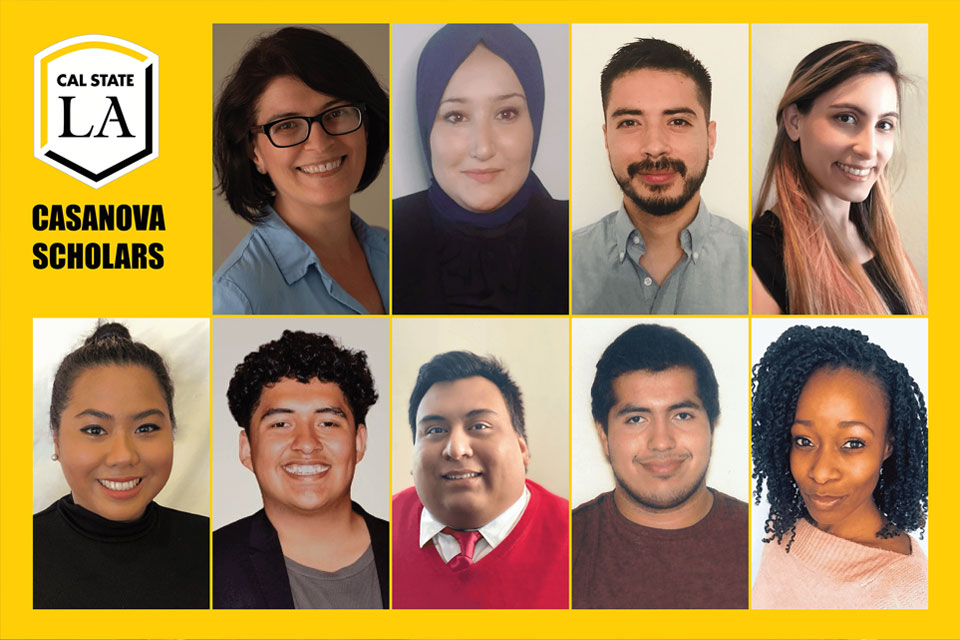 Each scholar receives a $3,000 award to help fund graduate exams, fees for professional conferences and other costs related to graduate school.

Tehmine Baghdasaryan is a graduate student in the management program who plans to pursue a doctorate in business. With a focus on Joseph Schumpeter’s Theory of Economic Development, she is interested in innovative opportunities and their relation to profit, capital, credit, interest and business cycles. She would also like to learn about the dynamics of entrepreneurship through the lens of world system theory. She is a Pasadena resident.

Sarra Ben Ghorbal is a sociology undergraduate student whose studies focus on the voices of underrepresented Muslim women immigrants and refugees. Her research examines the complexity of interactions between race, ethnicity, language and religion and its retro-amplifying, multi-dimensional effects on empowerment, integration and social and economic mobility of Muslim women immigrants in the U.S. After completing her bachelor’s degree, she plans to pursue a Ph.D. in social sciences. She resides on the Westside of Los Angeles.

Jorge Cruz is completing his master’s degree in Latin American studies with the goal of pursuing a doctorate in the humanities. His current research examines the intersectionality of race, sexuality and class to investigate how queer people of color reimagine identity from a transnational and post-colonial perspective. With a focus on the evolution of identity in the rural borderlands of Mexico and the United States, he is exploring how working-class queer men of color challenge dominant notions of Mexican male identity through a de-colonial queer lens. He resides in the Lincoln Heights neighborhood of Los Angeles.

Shelby Medina is pursuing a master’s degree in anthropology. Her research explores the acquisition and processing of vertebrate taxa within the Santa Monica Mountains of Southern California. She is working on developing a more complete picture of the human-animal ecodynamics at play in this study area. For her doctoral studies, she is particularly interested in sites located near the coast due to their susceptibility to damage and erasure by both natural processes and human interferences. She is an Upland resident.

Angela Patricia Navata is a master’s candidate in psychology. She aims to expand research on the Filipino and Asian American community by focusing on the social, political and economic issues that affect mental health. Her master’s thesis focuses on how colonial mentality is related to colorism and phenotypic bias among Filipino Americans, which in turn is related to lower ethnic identity in this population. She plans to pursue a Ph.D. in counseling psychology, with an emphasis on community-based research. She intends to broaden her research interests to other underrepresented Asian American communities to promote mental health help-seeking behaviors and the incorporation of culturally based practices. She resides in San Gabriel.

Daniel Olivares-Zambrano is a graduate student in biology. His research interests involve understanding how certain phenotypes are selected for organismal-environmental dynamics. He is also interested in understanding how these interactions affect the function and evolution of individuals or populations of marine species. Currently, he is using genomic techniques to scan through rockfish genomes to identify genes that may have had a significant role in their speciation. His goal is to earn a Ph.D. and to help increase underrepresented students in the STEM fields. He is an El Monte resident.

Adiel Perez is working on a master’s degree in chemistry with the goal of pursuing a Ph.D. in a STEM field. His thesis is on the study of the physical mechanism of antifreeze proteins for developing the next generation of bio-mimicking antifreeze materials for biomedical applications, including cryopreservation of living cells, organs and tissues. He is now developing bio-mimicking antifreeze materials based on the theory of thermodynamics and kinetics of physical chemistry. He resides in East Hollywood.

Enrique Segura Carrillo is a graduate student in physics. He is researching the use of nuclear magnetic resonance techniques to probe metal-organic frameworks (MOF) samples and devices. He is working on automating experimental setup for fast temperature measurements, as well as developing density-functional theory-based simulations of a pair of copper ions to estimate electronic conditions of the MOF. His goal is to earn a Ph.D. in a STEM field. He is a resident of Sylmar.

Kanique Thomas is an undergraduate student in psychology. She is investigating cross-cultural interventions for the reduction of emotional reactivity, specifically anxious temperament. Anxious temperament, or AT, a trait expressed in early life, is linked to the development of anxiety disorders. As these disorders increase in prevalence globally, her work in sorting predictive interventions that mitigate AT’s progression holds heightened relevance. Through her doctoral studies, she aims to analyze therapies from within and beyond Western societies to discern culturally conscious treatments. She resides in West Hollywood.

The Casanova award honors the late Sally Casanova, who launched the program in 1989. She was a staff member with the CSU Chancellor’s Office during the 1960s. Casanova also served as associate vice president for academic affairs and dean of graduate studies at CSU Dominguez Hills from 1991 until her death in 1994. She was married to Joseph Casanova, a Cal State LA emeritus chemistry professor.