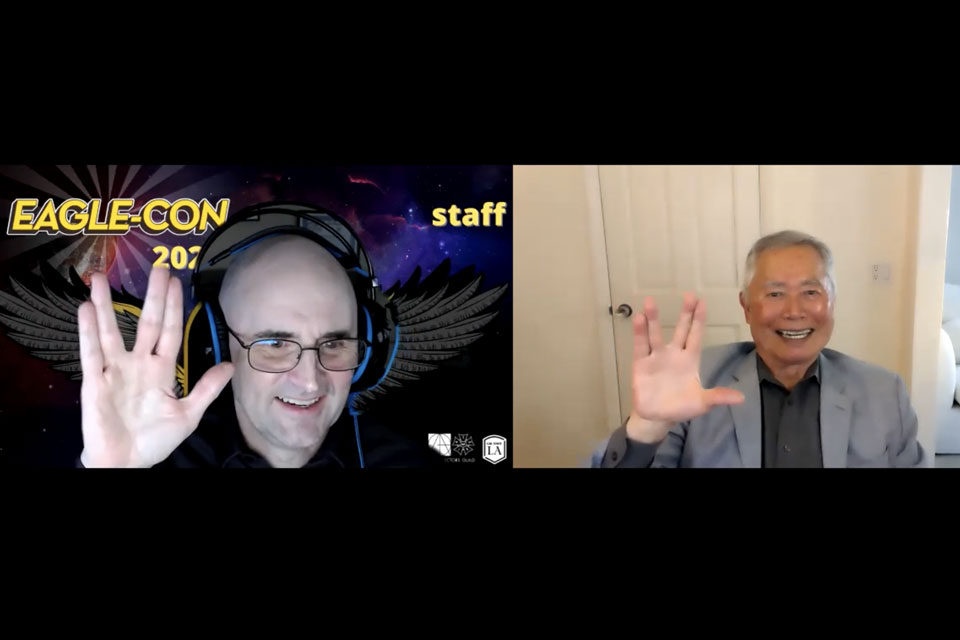 The award recognizes his outstanding contributions to diversity in science fiction across media.

Best known for playing Starfleet officer Hikaru Sulu on the original, award-winning television series Star Trek, Takei’s legendary career has spanned more than 40 movies and hundreds of television shows. He has been a strong advocate for disadvantaged communities and LGBTQIA+ rights.

“I am very much honored to receive this,” Takei said, holding the Prism Award trophy during a virtual award ceremony, “from a group of people who share an important spirit—the spirit that brings you all together—a passion for science fiction, and the future, and recognizing diversity is our strength.”

The award headlined the second day of Eagle-Con, a three-day convention that celebrates science fiction and fantasy while exploring the topic through the lens of race, ethnicity, gender, sexuality identity and representation.

Takei, who received an honorary Doctor of Humane Letters from Cal State LA in 2016, grew up in the nearby Eastside neighborhood of Boyle Heights. During World War II, he and his family were among the 120,000 people of Japanese descent forcibly removed from their homes and incarcerated in camps by the U.S. government.

Drawing on his personal story of incarceration, Takei warned of democracy’s fragility in the face of fear, despite being built on a scaffold of wonderful, noble ideals. He also shared how science fiction can inspire a better society, evidenced by the recent landing of the Mars Perseverance rover and the coming Artemis program that will—for the first time—place a woman on the moon.

“This year’s Eagle-Con presented challenges, but doing an entire conference on Zoom also presented new opportunities,” said Andrew Hagelshaw, the director of communications for the Art Directors Guild. “Out of necessity, we developed the first ever virtual exhibition of work by members of our Art Directors Guild, IATSE Local 800.”

Works from the Art Directors Guild hung from grey display boards within a virtual atrium where attendees clicked through galleries and zoomed in on individual pieces to learn more. Mediums ranged from concept art and set designs, to story board panels and construction plans, sharing an inside look at the conception of notable movies and television shows like Blade Runner, Star Trek, Aquaman and Mindhunter.

Along with Takei, a pair of special guests were honored for their career contributions impacting others in a manner in line with Eagle-Con’s mission.

The award, named in honor of multi-award-winning author and Cal State LA alumna Octavia E. Butler, recognizes work that contributes to the world of science fiction, fantasy and speculative fiction that exemplifies and carries the same spirit and excellence as its namesake.

On Saturday, award-winning production designer Wynn Thomas was presented with the 2021 Eagle-Con Imaginator Award for wondrous achievement in visual conceptualization. His works include production design for Mars Attacks!, Hidden Figures and Da 5 Bloods.

The Prism Award recipients from 2014, Michael and Denise Okuda, discussed how they, respectively, approached working on Star Trek franchise as a scenic artist and scenic art director, to advance the franchise’s slogan of “infinite diversity in infinite combinations,” using typefaces, color ranges and graphic characteristics.

Multiple panels centered conversation around Afrofuturism, an aesthetic that infuses elements of African cultures into science fiction and fantasy.

On a panel discussing the history and development of the comics industry and superhero franchises, author and editor Milton Davis talked about Jingle Jangle: A Christmas Journey in the context of moving Afrocentric stories to the mainstream and highlighting Black creativity.

“We had this amazing musical that came out, which was very Afrocentric,” Davis said during the panel. “But it was about the people. It wasn’t about the struggle. It was about these characters and these people going through this situation.”

He went on to praise indie creators for growing a wealth of narratives, showing mainstream creators what’s possible.

Engaging with these industry-professional panels helped students realize how they can pursue careers and imagine their own potential for impact on the entertainment industry.

“During this pandemic, we felt it was even more important to help our students connect with one another—and with scholars and professionals—to learn about and discuss science fiction, and to meet people who can help them understand how they can contribute to the genre as writers, artists, scholars and future professionals,” said Patrick B. Sharp, a professor of liberal studies in the College of Arts and Letters and a founder of Eagle-Con who served as this year’s faculty director of the convention.