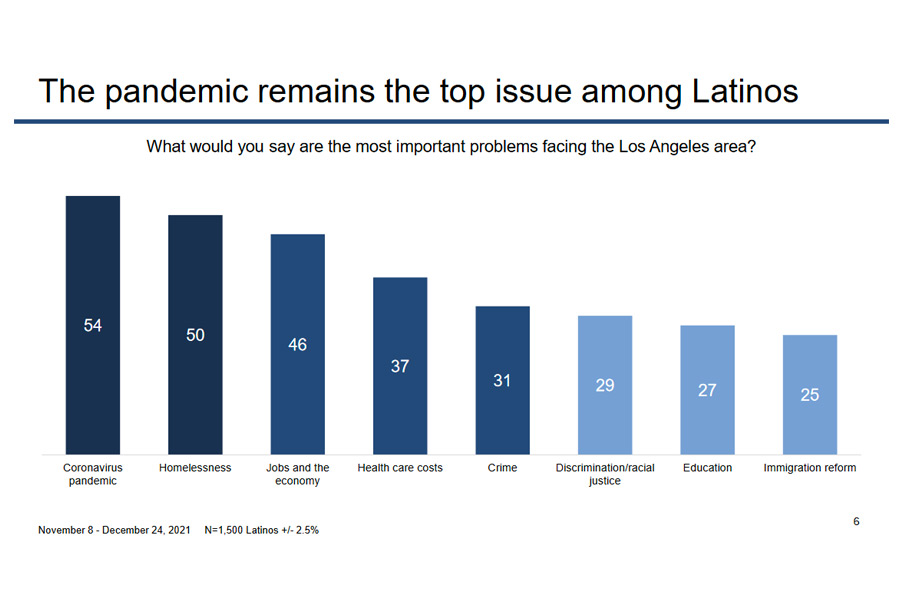 The Pat Brown Institute for Public Affairs at Cal State LA (PBI) and the California Community Foundation (CCF) released a new survey of Latina/o residents in Los Angeles County, a community that will be a major factor in L.A.’s upcoming mayoral race and in other elections.

The survey provides rare insight into the experiences and views of a community that makes up nearly half of L.A. County’s population and nearly a third of the electorate.

“Here in Los Angeles County, far too many Latina/o residents are struggling economically, have been hard hit by the pandemic, and are deeply concerned about growing anti-Latino discrimination,” Raphael J. Sonenshein, executive director for PBI, said about the survey findings. “But even with these struggles, Latina/os are infused with a sense of optimism and hope for the future.”

The findings were released during a webinar held on March 1, the first of a two-part Voices of L.A. survey series from PBI and CCF.

More than 1,500 Latina/o residents, both voters and nonvoters, were polled. Research and polling firm BSP Research conducted the survey from Nov. 8 to Dec. 24, 2021, under the direction of veteran researcher Matt Barreto and with support from PBI and CCF. Barreto is president and founding partner of BSP Research and a professor of political science and Chicana/o and Central American Studies at UCLA.

During the webinar, Barreto outlined key findings of the survey and Sonenshein moderated a panel discussion of the results with Antonia Hernández, president and CEO of CCF; Efrain Escobedo, vice president of public policy and civic engagement of CCF; Angélica Salas, executive director for the Coalition for Humane Immigrant Rights (CHIRLA); and Jean Guerrero, opinion columnist for the Los Angeles Times.

“Latinos are a hard-hit community, [the pandemic] is not behind us,” Barreto said during his presentation. “Serious economic and health consequences remain.”

Of the residents surveyed, 47% had lost their jobs or had their hours cut during the pandemic and 50% of households had $500 or less saved for emergencies.

In the survey, 75% of the respondents said they believe pandemic relief from the government should continue, with 1 in 3 saying they believe such support should increase.

The survey also delved into the social and political identity and behavior of the Latina/o community. When asked if they prefer to use the term Hispanic, Latina/o or Latinx when describing their ethnicity, 62% of respondents chose Hispanic, 29% preferred Latina/o, 2% preferred Latinx, and 8% preferred something else or had no preference.

While a majority of respondents (54%) leaned Democrat, only 25% considered themselves liberal and 48% identified as moderate.

Friends and family were noted as the top political influences for the Latina/o residents surveyed, and teachers and healthcare staff were viewed as the most trusted community figures.

For 80% of respondents, anti-Latina/o racism is a serious problem, and 62% reported that they believe immigrants experience the most discrimination. Half of those surveyed reported personally experiencing discrimination while using public transportation, at school, at the workplace, or in another setting.

Despite the challenges facing the community, respondents reported being hopeful for the future, with 86% saying they believed their economic situation would become somewhat or a lot better over the next five years.

“[This survey] leaves me with a sense of hope and more like an expectation that people will take these results seriously, that they will seek to try to understand our community in a nuanced way,” Hernández said. “For the public and politicians … it is in your self-interest for you to understand this community and to serve this community because we are the future.”

Overall, 70% of respondents completed the survey online and 30% were interviewed by phone, with 61% completing the survey in English and 39% participating in Spanish, based on their preference. The poll’s margin of error is ± 2.5%.

View the survey results and the key findings on the PBI website.

Results from a new poll of the Asian American and Pacific Islander (AAPI) community will be released during a March 15 webinar.

“The AAPI and Latina/o communities in Los Angeles make up a substantial portion of the county’s resident and voting populations, and while they are often included in surveys in small numbers, there really haven’t been a lot of deep dives into how they see the world socially, economically, and politically,” Sonenshein said. “These are big communities that really deserve much more exploration at a deeper level than they have gotten, especially in an election year.”